Did anyone give up porting their number out of Public Mobile due to the difficulty?

Did anyone give up porting their number out of Public Mobile due to the frustration of calling and dealing with their porting department? First of all, their SMS message never comes. Then, if you call the porting department, you get put on hold for an hour only to be cut off because "their is no one available to take your call".

I swear this is their customer retention program.

Do you need to reinitiate your port request into public mobile?

Would you please be able to share this porting department contact here so we can reach them?

I did not bother to ask. Freedom did not do anything different but after my sternly languaged email, Public managed to find the latest porting request and manually approve it. I never received any SMS message.

So what was the actual issue that caused the problem?

Thanks to advise from @darlicious and @stephenCA, this issue was finally resolved today after being bounced around like a ping pong ball and hours on hold only to be cut off several times. It's unfortunate that I had to take the gloves off and go into full irate customer mode to get support to actually do anything other than continue telling me it was up to the other carrier to keep re-sending porting requests because they did not receive it. If anyone wants a copy of the letter I sent them to get it done, DM me. It just outlines how I would have escalated the matter to Telus senior management, the CRTC, my federal MP and media consumer watchdogs (e.g. CBC Marketpace). You have to be ready to follow through on those actions, though.

yes I am having the same problem as op

Thank you! That shines a lot of light on the likely issue being with the telus automatic authorization system.

Rafael isn't the brightest bulb in the bunch. Send a private message to customer support telling them you have discovered there is a likely issue with telus's automatic authorization system. As such despite multiple attempts  to authorize the port you were forced to top up and renew and you want a full refund of your plan amount as this was 100% their fault. Mention that the ability to easily port out your number is enshrined in the WCC and you will happily file a CCTS complaint if you do not recieve a refund. Include a screenshot of your many YES replies to the PAT(s) sent to you.

Furthermore customer support can release you phone number to freedom if you give a "verbal" or written authorization. The CSA should have picked up on the issue and explained your options to you (so should have freedom)....so include in your message to customer support your pre-verifiers of your pm account:

Porting my phone # to freedom does not release pm from the refund amount I have requested.

Sign off with your full name and phone number. Screenshot your messages with customer support for good measure and any relevant account info. Download your usage history (90 days) and transaction history (360 days) for future reference as your account will be inaccessible after your port does complete. Good Luck!

you're just going to have to wait.

do all the services work with the freedom sim?

you can try resetting the network settings with the freedom sim installed. maybe that will disconnect the PM account. otherwise tomorrow morning with the porting department will be your best bet

Just one of a gazzilion messages (I never received the SMS messages, so no way for me to respond) 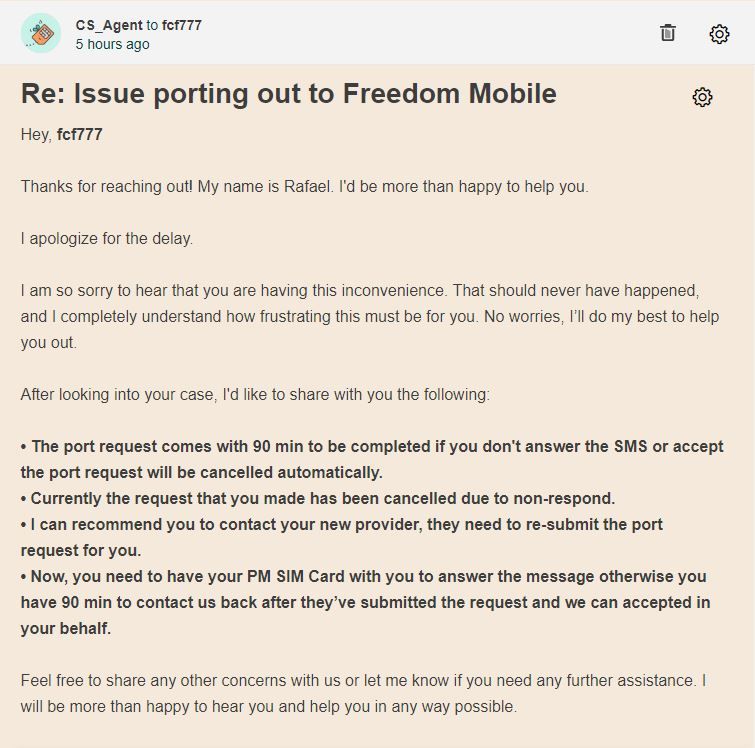 A couple of friends have been with Freedom and recommend the service. 3G roaming is gone in the US and I need LTE outside Canada/North America to receive SMS verifications which is available with Freedom's $15/month postpaid plan. Also 1Gb LTE and no limit, just throttling above it. My wife has Bell cell service, so we are still good traveling outside the Freedom home area.

Based on my experience so far, my best guess is that there seems to be something going wrong over the last couple days with Telus (and related brands) ports - particularly in the authorization portion. Here's my story and why I think that.

I have been fighting to get my number ported to Public from Telus since yesterday. Yesterday, during the request, I received my confirmation text message (on the Telus side) to confirm the port out was authorized. I responded Yes (properly) and about 1.5 later I received it again. Once again, I replied properly. 1.5 hours later, received it a third time. Worth note: My Telus line stayed active all night.

Today I eventually got a hold of someone at the Telus ports team and on their side it showed it did not receive a response from me for the confirmation of the port out (from Telus). Given my three correct responses, that seems to confirm something going on with their port authorization system - in my case a failure on the Telus side. The person I spoke to was very helpful and alluded to a lot of calls over the last few days (but in full disclosure they never directly commented on any issue). Today while I was waiting for things to get properly resolved, I hopped over to the Koodo Community to check it out (out of curiosity) - it seems several people with issues there too.

My issues have since been resolved (combination of dealing with the Port team and a Public Mobile agent), but to me, it seems like something is going on with the Telus automated port system. I ended up talking to two people through the day on the ports team - and both of them talked about having to do a manual authorization possibly. They both were pretty quick to have this answer, so I think that might support widespread issues under the Telus brand.

What's interesting is that coincidentally on Sunday evening I transferred my wife's phone out from the same Telus account, out to Koodo without issue. She had no problem with the system recognizing her Yes response. Given it was Sunday about 7pm Pacific Time, that might point toward traffic issues (I assume it would be less busy at that time of night on a Sunday).

@fcf777   think twice if you want to go with Freedom.  My buddy was on Freedom, nothing but complains, he moved to PM couple weeks ago for the $40 deal

I continue to receive text messages on the PM cell number that I am trying to port to Freedom Mobile.

Initially the Freedom store rep initiated the porting request. After it did not work, I've been calling Freedom Mobile to initiate the request. I've done it 5 times. Provided the PM account number, phone number. Anything else I might have missed?

the simple solution is PM needs to fix it. they are having issues with their porting system. there's nothing freedom can do. don't worry about anything else. you're correct... I don't know why PM is sending you to the porting number, but send them a private message and leave it at that... can you screenshot the messages they sent you?

Not sure I'm following because the Freedom SIM works so it has been provisioned correctly. The Public Mobile SIM is still continuing to work as well.

This is a very strong disincentive from ever switching back to Public even if they offer better plans and service in the future.

The freedom porting department is an on hold nightmare? Something is blocking your PAT (porting authorization text) have you double checked the spelling of your name?

@fcf777   reply them and tell them it is not porting problem.  Tell them you cannot even make outgoing calls, it is a sim provisioning problem.

you were calling Freedom porting department?

thanks @darlicious   Too many porting issues  LoL

I've opened three tickets since yesterday afternoon. No results as far as I can tell. Only response I get is from Customer support DM but they just point me to call the porting department which is call on hold hell.

On occasion there has been a similar issue reported when porting to freedom.

All, thanks for your responses but I've tried all of that and still trying despite the urge to pull all my hair out. I was just asking the community if my situation is unique or more common than not.

have you open ticket with PM yet?  If not, or if you want anther ticket , use this direct link
https://urlshortner.tiia.ai/Lc9xk8

If you have made a request to port your number to another carrier and have not received an SMS from Public Mobile to confirm your request, please open our chatbot via this link. This will put you in touch with our Customer Support Agents who will be able to assist you.

Try your IMEI # of your phone. Just double check it is correct. Have you spoken to the freedom porting department as to the issue?

HI @fcf777   and porting is something between 2 providers.  Maybe it is Freedom problem?

Yup, this is the fifth time. Still no SMS!

Just to confirm….you contacted Freedom Mobile 5x to ask them to port your number out of PM? You also left your old PM sim in your phone for the confirmation text to port out that never came?