Although Public Mobile may not support 5G any time soon, I thought I would start writing about what's new with this latest technology. There's a lot of terminology and confusion, so hopefully this will help!

You may have heard the terms NSA, SA, NR, DSS, mmWave, network slicing, and many other buzzwords. But what does it all mean?

To start, let's get some definitions out of the way.

NR = New Radio, this is the 5G wireless standard (equivalent to LTE for 4G)

NSA = Non-standalone, a type of 5G connection requires 4G at the same time in order to operate

SA = Standalone, a type of 5G connection has no dependency on 4G

At a high level, there are 3 broad categories for 5G, and the technology is expected to support these use cases:

Let's talk about each in a bit more detail.

eMBB is what we're all using today. It's smartphones and other devices that support extremely high speeds and capacity for things like high speed data, fixed wireless broadband (wireless home internet), virtual or augmented reality (VR/AR). This is supported with 5G NSA and 5G SA.

mMTC will come later. It will support massive deployment of IoT devices, which basically means sensors and smart devices everywhere. Think millions of devices needing very little data. This will be supported only on 5G SA.

URLLC is also a future technology. Its goal is sub 1ms latency and extremely high reliability for mission-critical applications like factory automation, remote controlled vehicles, remote surgery, etc. It's important to note that URLLC can't support high Gbps throughput. This will be supported only on 5G SA.

Ok, let's talk about the differences between SA and NSA. Basically it comes down to 2 things. SA needs a new 5G core network, while NSA can use the old 4G EPC core network, but it must also use 4G eNB at the same time.

When 5G was first being developed as a concept, researchers came up with 7 different network options:

Here is a visual representation of all the options, courtesy of GSMA: 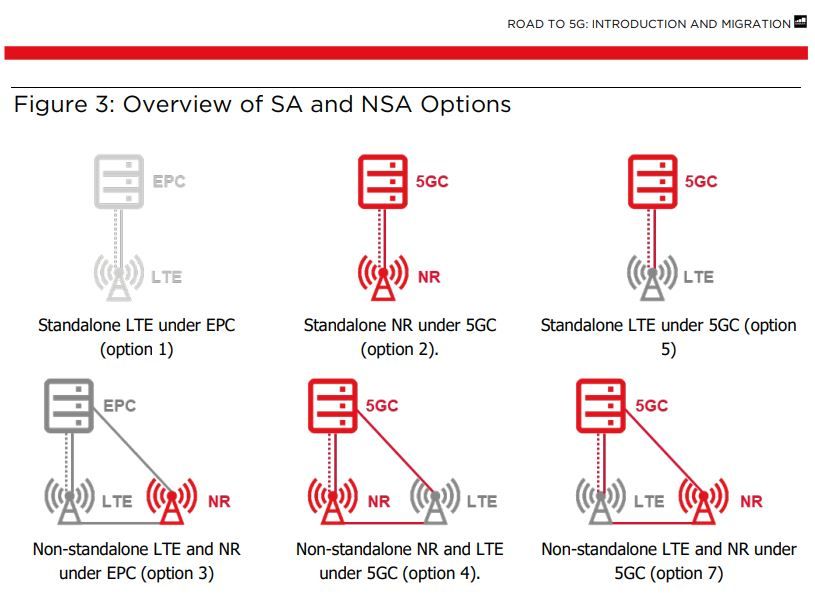 You can see 3 possibilities for NSA. Operators and vendors settled on Option 3x (a variant of Option 3) since it didn't require a new 5G core network. This allowed the industry to rapidly deploy 5G NSA while using existing 4G core networks.

You may have heard the term LTE anchor, or anchor band. In the context of 5G NSA, all of the signaling between the network and phone is done on LTE. In order for 5G NSA to work, the phone must first find a suitable LTE band to act as an "anchor", and then wait for the network to add 5G on top for extra speed. It also means if a 5G NSA phone only has 5G coverage (no LTE), it won't work. It'll be completely out of service. Finally, voice calls on 5G NSA are done entirely on LTE with VoLTE.

Only Option 2 and Option 3x are actually adopted and deployed by the industry for 5G.

The deployment of a brand new 5G Core for SA is extremely complex and requires considerable effort and resources. This is the main reason why 5G NSA was introduced.

With 5G NSA, there can be many bands on the LTE side and NR side. For example, an operator can deploy 32 CA LTE + 16 CA NR in principle, but they would need to have lots of spectrum, RAN software that supports it, and most importantly a phone that supports that specific combo in order to use it. Bell/Telus are currently deploying 2-7-7-66_n78_n78. They have 4 LTE + 2 NR bands aggregated as their main combo. They can add more combos on their network, but without a phone that can use those combos, it's pointless.

5G band numbers start with lower-case "n", to differentiate from LTE. For example, Telus can deploy LTE band 66, or NR band n66. It's the same spectrum. An operator can choose to deploy their spectrum as LTE or NR as they wish.

A new concept in 5G is DSS or Dynamic Spectrum Sharing. This allows an operator to deploy a frequency band as 4G and 5G simultaneously. The eNB and gNB will dynamically schedule traffic to users depending on the demand. There is quite a bit of overhead and inefficiency associated with DSS (especially on the 5G side), so it is not used for small channels like 5 or 10 MHz. Typically it is used for 15 or 20 MHz.

Let's talk about peak speeds (or eMBB). With a combo like 2-7-7-66_n78_n78, there is 75 MHz of LTE and 80 MHz of 5G (GTA spectrum). This can get close to 3 Gbps technically, but a realistic speed test would yield something like 1-2 Gbps in good conditions. If Bell and Telus launched SA, they would only have n78-n78. They can't use the LTE bands at the same time in an SA scenario. Which means, peak speeds on SA will be slower than NSA, at least for a few years until phone manufacturers stop supporting new NSA combos. Eventually NSA will stop being developed and everyone will work to make SA better. At some point in the next few years, we will see SA speeds catch up to NSA.

As for latency, there is a small improvement with 5G compared to LTE in general, even with 5G NSA. This can bring real-world latency down to low double digits, with the eventual promise of low latency coming with URLLC. This technology promises latencies of less than 1ms, but it will not be a simple achievement. There are going to be many years of small, incremental improvements until we see latencies in the low single digits.

From what I've seen so far, networks cannot support high throughput and sub-ms latency on the same device. The tradeoffs needed to achieve low latency will result in lower throughput. I believe smartphones will be designed for peak speeds, and may get to 5ms latency, but not sub-ms. New applications will require sub-ms latency on specialized 5G equipment, which will be achieved by trading throughput for better latency and reliability. URLLC is only possible with SA.

Another important concept that will be introduced with 5G SA is Network Slicing. This is the concept of the network giving specific resources and profiles to user applications, similar to what I described above with eMBB, mMTC and URLLC. Here's a good picture, again courtesy of GSMA:

Lastly, let's talk about spectrum. All existing LTE bands can be used for 5G. Some bands that are overlapping are no longer defined. For example, in LTE we have B17 and B12, where B12 is a superset. In 5G we only have n12. Same idea for B4 and B66, in 5G we only have n66.

Alright, so now we know operators can repurpose or "re-farm" their existing spectrum for 5G when they are ready. They can also use DSS to do a soft re-farm of 4G and 5G on wider channels like 15 or 20 MHz.

In the initial 5G specifications, 3GPP defined traditional frequencies as "Frequency Range 1", also known as FR1. This was spectrum up to 6000 MHz, which is why people started referring to it as sub-6 or sub 6 GHz. The specs were later modified and FR1 now goes up to 7125 MHz, although sub-6 is a term that is still used. A new frequency range known as FR2 has been adopted, operating in much higher frequencies.

FR2 frequencies have wavelengths generally less than 1cm. For this reason, FR2 is commonly referred to as millimeter wave or mmWave.

As always, if you have more questions, just ask and I will be happy to try to answer them!

@sheytoon , thanks for the education.  I am so not looking forward to losing 3G because Telus' implementation of VoLTE pretty much requires customers buy phones from them.  Why such incompatibility?

I lost you after …”Hi everyone,” 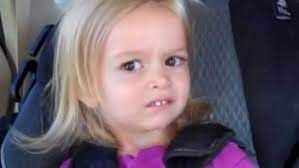 You should come here a lot more  🙂

Haha, thanks @softech. Though judging from the first few reactions, I think I went a bit too technical and didn't anticipate my audience correctly. Might need to edit the post to make it easier to understand.

Great resource as always. Thanks for the effort and time to do that. A piece that I think I got out of it was that 4G LTE and VoLTE will be with us for a while. And it kind of proves my thought that 5G seems to be marketing gee whiz.

@will13am for most people who own iPhones or Samsung phones, VoLTE should be supported with a software update. There wouldn't be a need to buy a phone from Telus. Telus could ask Apple and Samsung to enable VoLTE for PM subscribers. I've heard it's in the works, but no idea when it'll get done. Hopefully by end of this year.

It's the international "grey market" devices that are going to be a pain for customers. But then again, those devices are probably not supporting VoLTE today on the main Telus brand anyway. I think the phone manufacturers should take a lot of the blame for this. Often they insist on disabling VoLTE in firmware until they test a specific operator's network and sign agreements to sell that phone.

Overall, the whole industry dropped the ball on universal VoLTE compatibility. It was so much simpler with 2G GSM.

Thanks for clearing up some of the confusion for me on this. I hope PM does start to prepare for the future (functionality wise) even if it isn't 5G anytime soon