I referedmy friend to open PM account. His cellphone has baraly signal at his condo and neighbourhood ( There's a library there).

I asked agent about signal and the agent provided a link of cellphone information about my friend cellphone. Please check the picture as below,

The agent suggested my friend to purchase a new cellphone has better signal.

My friend says to me , ONLY his neighbourhood area (condo and library) with baraly signal and he walks a few blocks and with full signals and high speed data ( even his 3G data plan) in the detached house area.

He asked me what happened of Telus network and the reason. He is confused. It looks like his cellphone doesn't have any issue but his area WITHOUT signal. Plus, the information from the link provided by the agent seems NOT correct.

I come here to ask some experiences and suggestions for him. 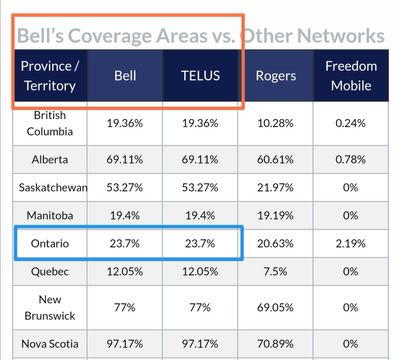 1. He just signed a contract and moved in the condo and NOT possible to move out recently.

2. If NOT his cellphone's issue, then it seems NO Telus signal of his area.

take your friend sim and try in your device.

and enter full info maybe the Tower issue to Telus or Bell tech coming to fix it.

@Mindy208 , if the information you supplied is accurate this phone is not compatible on the Public Mobile network.

Oracle
In response to softech
Options

@Mindy208  First , Kimovli is not a very reliable source.

It can't ben any worse than frequencycheck.com that states that Public Mobile uses a 2g GSM network and never corrected that despite them being informed numerous times that that the information is wrong.

@Mindy208  First , Kimovli is not a very reliable source.  Many phones have different regional variant and Kimovli usually fails to show the correct info in that aspect

Also, why you circle the 2G compatibility?  We are not using 2G anymore.   PM uses only 3G to deliver voice but can use both 3G and LTE for data and text.  So, you should check the 3G and LTE compatible bands instead.  Looking at the screenshot, it might suggest your phone is not compatible with any network in Canada.  If that is the case, the phone is likely a non-North American version.

What is that coverage % about?  It might not be that useful.by looking at the overall provincial coverage.   I suspect the 23.7% coverage means Bell and Telus covers 23.7 of the Ontario only. The number is low because many of the northern Ontario  and some part of the southern Ontario are not "urban" area and hence has zero coverage by any networks.  Most urban cities, towns have good and decent coverage by most major networks.  But of course, even  GTA ,  which supposed to get 100% coverage by all network, still  has many areas with weaker signals from some network.  Sometimes just weaker 3G signal, sometimes weaker LTE signals or in some case, or sometimes weak to no signal at all for some particular spot.s   So, important thing is to test it out in that area

So, my questions  to you are

1. What exact brand and model is the phone?

2. Which city your friend is at?  maybe you can provider major intersection as well?

3. and did your friend test out the phone in another area?

(but if Kimovli site was correct, it likely is a phone issue in your case)

@Mindy208  Your friend may need to move to a different carrier; asking some neighbours their experience may identify a better carrier.
In the meantime, suggest your friend

What is the model of his cell phone @Mindy208 ?

Is he able to try his sim card into another compatible phone to see if services are better?

Can you tell us the brand/model of your friend's  phone?