No notifications? Any one else get this?

Anyone else receive this since the forum updates? (On mobile) They were working yesterday but very slow. 40+ minute delay on mobile compared to PC for some notifications.  Now nothing at all lol. 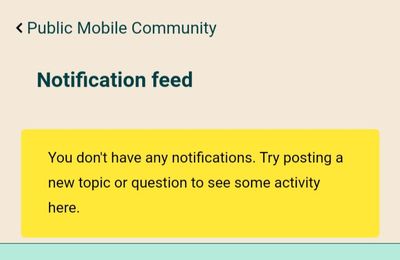 I used to selectively pick which categories I looked at but now I get it all in one big dumping ground.

Can you pick by labels now?

but honest, one big board means less moving posts around for Oracles..  Just need to make sure they don't move post to Lounge as well.. lol

@Jb456 as others have said, I've gotten that in the previous iterations of the community as well.  And to be honest, even when it didn't tell me that message, it would often/regularly show me no new notifications, but when I went and checked, some threads I was subscribed to had new replies.  So I usually start at the notifications feed but then also manually have a look around after.  It's a pain but something I got used to.

Unfortunately this is much tougher now that everything but announcements and the lounge are all dumped in one category.  I used to selectively pick which categories I looked at but now I get it all in one big dumping ground.  They went from having too many categories causing confusion for people posting to essentially zero categories causing confusion for people browsing to help.  Would a middle ground have not been better?  Yikes.

@sheytoon  I do not really know. Probably due to them updating things. It has been weird though. On mobile that is. Was getting notifications but a few minutes delayed. Then went to over 40 minutes delayed on mobile even though when logged in on PC they were coming in instantly. Then notifications were displaying the screenshot I posted here for like 14 hours. They did come back yet it's all still delayed on mobile. Faster on PC. These delays have been during the day as well as like 3am when not as many are on.

I guess we'll see in the coming days. Well they said till the 7th I believe which is tomorrow. Not really enjoying this new update. Not cause of these delays but everything overall. All is combined, more clicks to get to something, links not there anymore, etc, etc.

I don't know what kind of testing was done before making this live. No idea what their processes are. I know for the company I work for. We do extensive testing on a server as if it was a live site until pretty much every bug, change, etc is found and fixed. Then its migrated to our live servers with minimal inconvenience to clients. Here it appears like its add everything to live and than deal with all the issues after wards.

I was wondering if the change are completed too.   In the Announcement, Jade said will post a Welcome post at the end of the upgrade and she posted it on the first day already... So, is it done or still going on?

@Jb456 didn't they say it could be like this until the changes are completed tomorrow?

Mine has been all over the place. Right now 4. Yesterday 2 pages worth, then 10, up and down.

@darkomega  lol nor do I. My notifications are back now. 14+ hours later. However still a big delay in getting them 😔

i haven't yet, but then I don't clear all of mine 😛

Lol...I get that all the time. On the old forum and twice since launch. I'm so used to it now it doesn't even bother me. I just go to a different page come back and my notifications are back.