This month, we’ve kicked-off our summer contests through our Public Points rewards program. Giving you a chance to win some awesome prizes!

We’re running 4 contests through the entire month of August. That means 4 chances to win, at the same time!

Entering our contests is easy, here’s how:

Got me to where I am today and I'm happy it has helped you along the way!

Sorry, who turned my autocorrect back on? LOL

I went to preferences under my settings in community profile I think is what it was and all I saw was preferences for email I saw nothing about text messages at all. Thank you. Communits awesome I just have to say that answers your phone out here and explained much more quickly and fully in the community I appreciate all who put time and work in here. How did you get some knowledgeable about all things Public Mobile? Just want to say I appreciate it.

You can and we do get text message notifications. You can also get selected for live chat via text message as well although it's a bit random at the moment as they test out the service. You probably need to resubscribe to text messages to get most of these notifications because you had unsubscribed. Although you could probably text subscribe to the various text short codes that we get messages from Public Mobile on it may be just easier to contact customer support to have the them add you again so it would cover all of the short codes that public mobile uses.

Good to know thanks. I've just resubscribed to email notifications. I just wish you could pick and choose which ones in particular you could have come to your email inbox. My chance to get overcrowded too quickly. And for that matter, I wish we could receive notifications especially the ones from customer service or public mobile directly as text messages too our mobiles.

This was one from couple weeks ago

It keeps referring to this contest and that it costs one point. So which is it? It doesn't even matter to me because I'm on dollar rewards. Do they ever give us any contests? Underhanded to say the least and trying to get us to switch programs. And what about loyalty to the longer-term customers?

I'm starting to get a bad taste in my mouth.

Now if the Points System were to truly work, requires More intense scrutiny and of course polishing, before PM clients make their escape from Old Points to New Points

i will stick with the old points thanks

Careful @CountyDownIeUk  i think your smoke is beginning to leak out…..

lol good call bc the odds are prob about the same

In no way would this tempt me to switch to the inferior points system from the old rewards system. And I'd rather use $1 to buy a scratch lottery ticket or perhaps a Western 6/49 ticket instead of $1 (for a point) to win a prize valued at potentially $2 million, rather than trying to win a $250 GC for specific retailers.

Wording was not clear on the $25 RAF either.

Which also makes me wonder. If the $25 RAF was emailed to some of us, but not all, and this offer was posted as a sticky for everyone on Points.....then the $25 off is only targeted to those that received  the email??

Yeah I was going to say. If you could use one point and be entered to win multiple prizes but 1 point per prize the odds are about as good as a longshot lottery and at least those have your actual odds and a bit more transparency 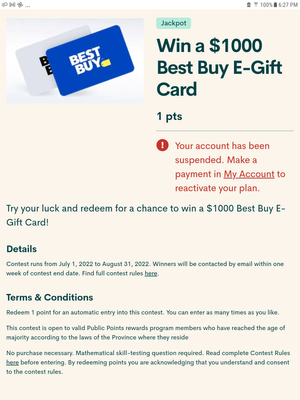 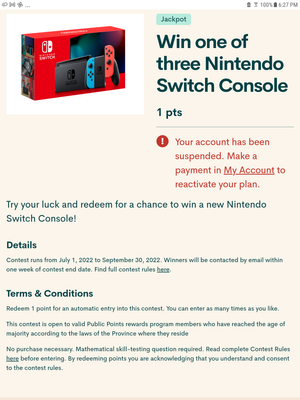 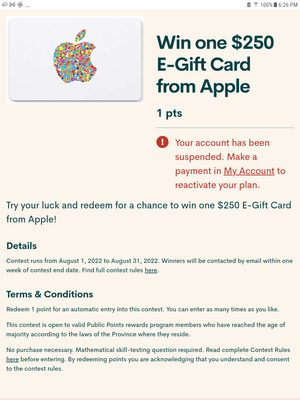 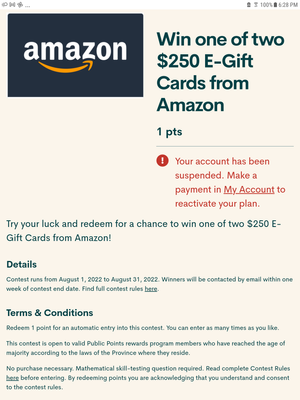 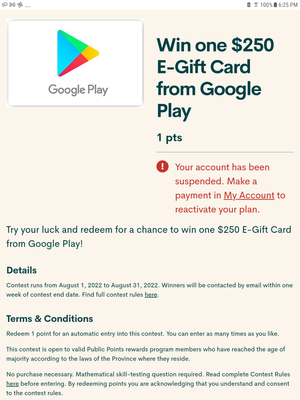 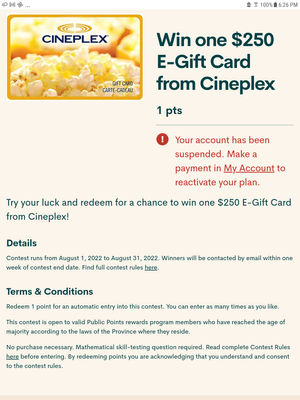 Now I am even more confused because I checked out the last link supplied above and it says there are two (2) Google Play gift cards worth $250 to be won? So which is it? One or two?

@J_PM  there are 4 links in your spoiler. Were they all meant to be there?

The first 2 cannot be reached...or I have a cache/cookie issue, which I wouldn't be surprised. LOL

The 4ths seems to work.

Probably the reason with two weeks to go pm needs to amp up the promotion of the lucky draw due to low entry numbers? The gift card retailer choices are less than compelling other than Amazon which can appeal to most customers. Only Apple users will pick the Apple draw. One must be a real movie buff to want to win $250 towards going to a movie theatre....I haven't even spent that in entire lifetime of going to the movie theatre and that was before the pandemic?!! People actually buy things from Google Play? Or if they do I highly doubt that many of them are public mobile customers? It is what it is I suppose....

Do you enter the lucky draw because your chances of winning a lacklustre prize are that much greater? Or skip it altogether and just leave the few customers who actually want to win one of their preferred prizes a much higher chance of winning because they will appreciate winningļ a prize? What a dilemma?

Second class public mobile client!  Trying to use influence to get one to see things their way. 😞

Thanks @J_PM   now this is tempting... To Migrate or Not Migrate, that is the question