Order of usage for add-ons

I thought I would post this as a more of FYI as I remember a lot of users ask in what order their add-ons will be used.

So I made an international call this morning and then I logged into my self serve account to see where the mins would be deducted.  I must admit I was surprised to see the minutes being deducted from the current holiday gift and not from my own international mins add-on purchased a couple of years ago prior to any gifts given by PM, or even last year's holiday mins gift.

This seems to imply the last add-on (gift or purchase) is being used first.

Used my 250mb up today....no new data add-on was used. It continued to use my old data add-on that I have been using for months now.

Still have a reminder set for end of month to check call minutes.

Have a good evening!

@Jb456  Thanks for updating.  So that seems to confirm what happened with me which doesn't follow what is supposed to be the official policy of last added and first used, except for the international LD mins so far.  It'll be interesting to see which add-on your mins get deducted from since I don't see an add-on of the 500 Canadian mins in your screenshot.

Here's new one from today. It's using last year's holiday add-on which it's been using probably since Jan or Feb of this year. 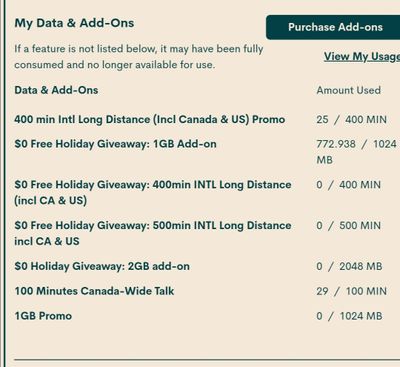 Here's new one from today. It's using last year's holiday add-on which it's been using probably since Jan or Feb of this year.

@Jb456  Sorry I should clarify my earlier post a bit, I should have said that you don't seem to have the 500 Canada wide add-on mins in your screenshot.   I do have that purchased add-on so I know if I deplete my plan minutes that add-on will be the first to be accessed.  For this discussion it's useful that you don't have that add-on to see which gifted add-on gets utilized first.  Thanks 😊

@dabr  Understood 😃.. and yes since I don't have Canada wide add-on. We'll see if it continues to use the 400 min add-on or (as mods are saying) the new holiday one.

It continued to use my old add-on. 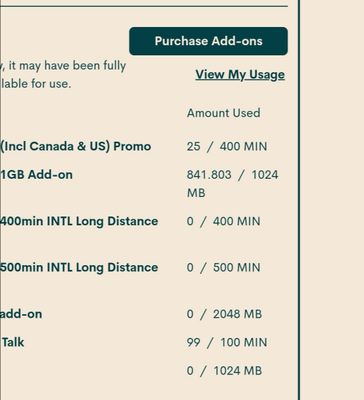 Did a call for 2 minutes. 30 day minutes went away and it used the other minute on the old add-on. 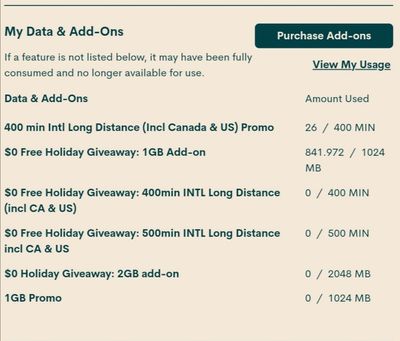 Things that make you go hmmm.

Things that make you go hmmm.

Haha, that about sums it up right?  😂

I think I'll try to use up my plan minutes before the next renewal cycle (won't be for a couple of weeks at least) and see which add-on gets used first, ie: PM's gift of 1000 mins (as mods' suggest) or one of my older purchased 500 mins (domestic) which already has minutes used from it.

I guess so far we've established that there is no particular rhyme or reason as to how PM's add-ons get utilized between the various purchased and gifted add-ons.. 😂

@Jb456   Sorry for the delay in updating this but I wanted to see which talk add-on (gifted or bought) would be used once plan mins were exhausted and the only one I could test was the account that is inactive for most of the time but which had received all gifts from PM inc.1000 Canada wide mins (for some in BC) plus the two international add-on mins gifted in 2019/20 and also has 500 Can. mins purchased sometime in 2019.  None of these domestic add-ons had mins used prior to today's test.

After using up the 50 plan mins, I can confirm that mins got deducted from 500 CW add-on (purchased 2019) and not from the most recent 1000 Can. mins gifted last summer.

So to recap the order for usage seems to vary depending upon whether the mins are international or domestic.  Domestic uses the oldest domestic add-on available, but for international calling the order is the most recent int. mins add-on.  Data usage seems to take from the older data addd-on too, especially one that had already had some usage deducted before.

Anyhow, it seems that last added, first used only seems to apply to the international mins add-ons, which I've been able to confirm is true on two different accounts now...

Apologies if this is all is a bit confusing!

Edit:  Forgot to mention that for some reason MMS doesn't get deducted from available 50 outgoing texts, that was suggested on another thread recently which makes the $10 plan with limited 50 outgoing texts more useful too.

@dabr  Thanks for the update 🙂