From time to time Lithium, our community platform, updates the system and causes some issues that changes how we interact with this community. Issues such as users are not receiving community notifications OR users are not being redirected to the first unread post. These examples might change the way we browse this community.

Use this topic to discuss and report any Community related issues. Out staff member, @David_J, will use this to track all reported issues. Let's help him to make this community even better.

New Here? - Check out Knowledge Base Articles to learn more about Public Mobile.

Interesting.  At least the messages still seem to show up in the order they were posted, not by timestamp, at least in this thread, for example: 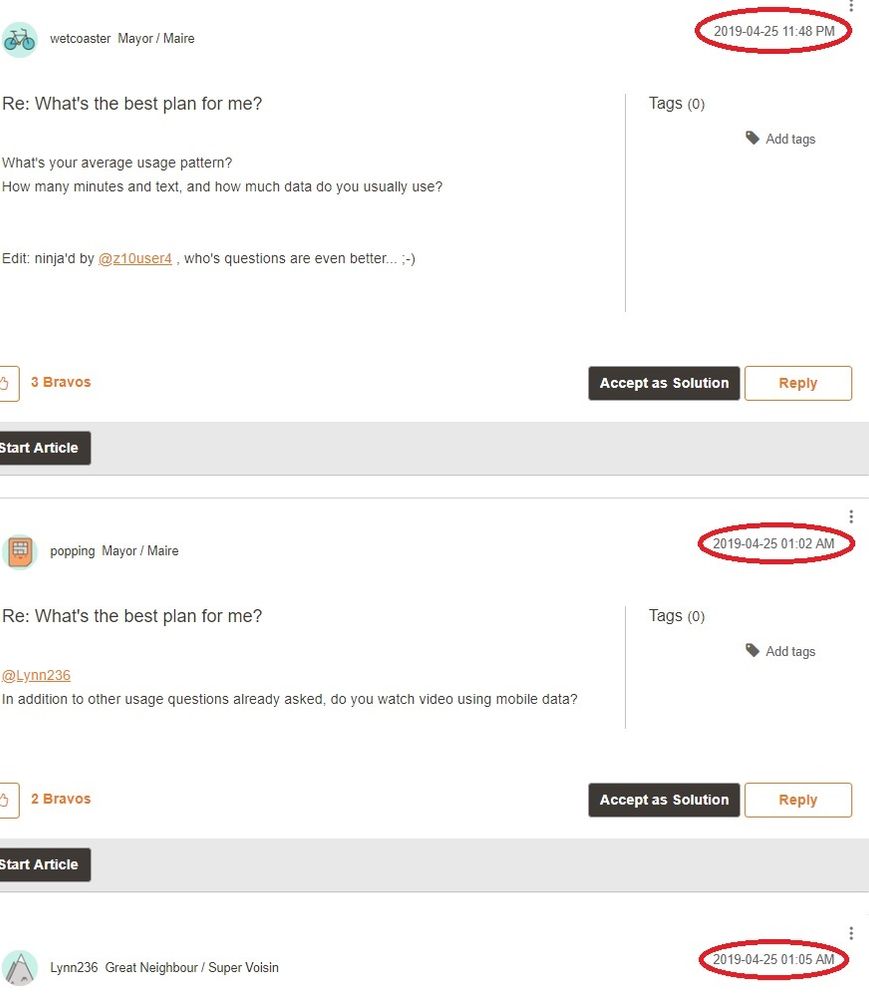 EDIT:  The glitch appears to have been short-lived, as my message here posted with the correct date and timestamp.

Popping and Lyn236 must have had a time machine.  Current message now have the correct date, but from what I see, any messages posted a couple of hours ago still show the wrong one.

New Here? - Check out Knowledge Base Articles to learn more about Public Mobile.

The glitch with incorrect datestamps has occurred again. See this snapshot of the latest topics taken around 1:50 a.m. April 29, 2019. The topics posted before midnight have the correct datestamp of April 28, but those after midnight are still dated April 28: 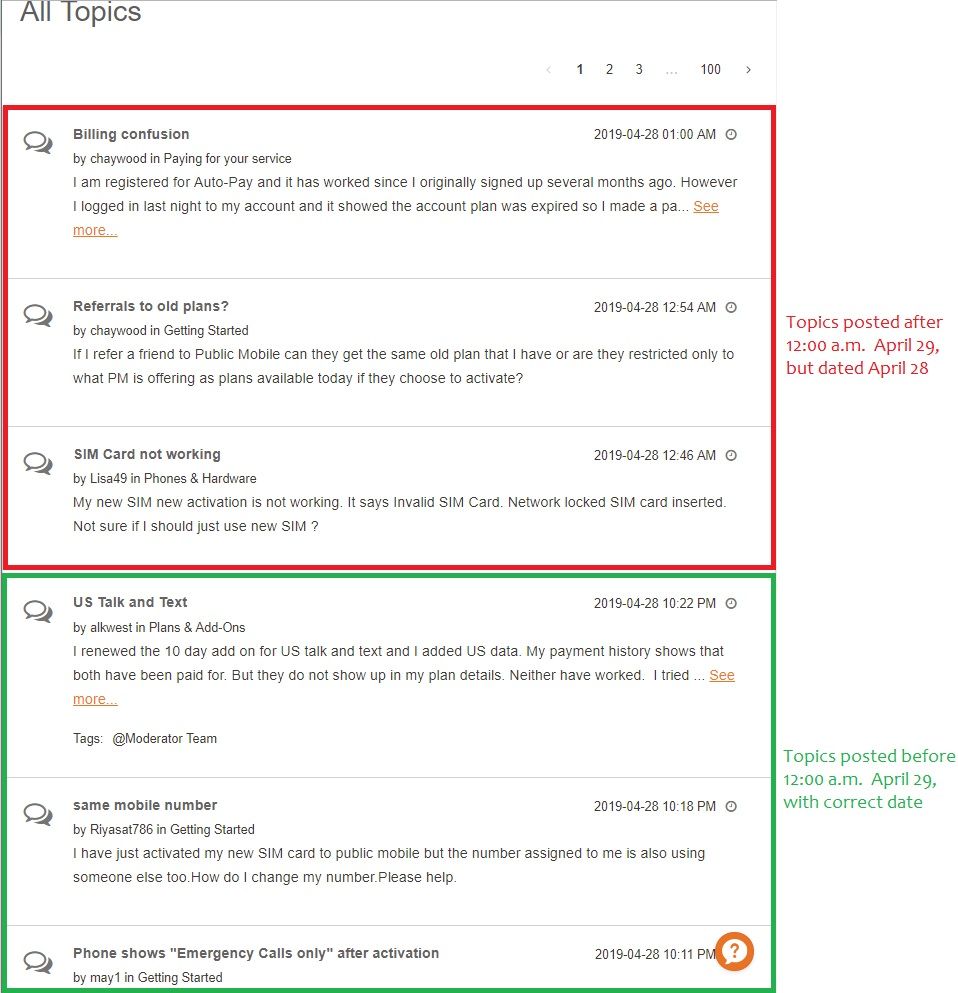 The previous occurrence of this a few days ago also involved posts shortly after midnight, so perhaps this glitch has something to do with the PM community server's internal clock being slow to turn over to the next day. (The actual timestamps seem correct, but the datestamps aren't.)  Again, the messages still show up in the order posted.

My message here has a date of April 28, even though it was posted April 29.

The datestamp error seems to be occurring daily now, as it happened again early this morning. It appears to affect all messages posted between 12:00 am to 3:00 am, as you can see in my following snapshots from latest posts, where the previous day's date is continued for posts until 3:00 am.  It's as if the timestamp is based on eastern time while the datestamp is based on pacific time, lagging 3 hours behind. 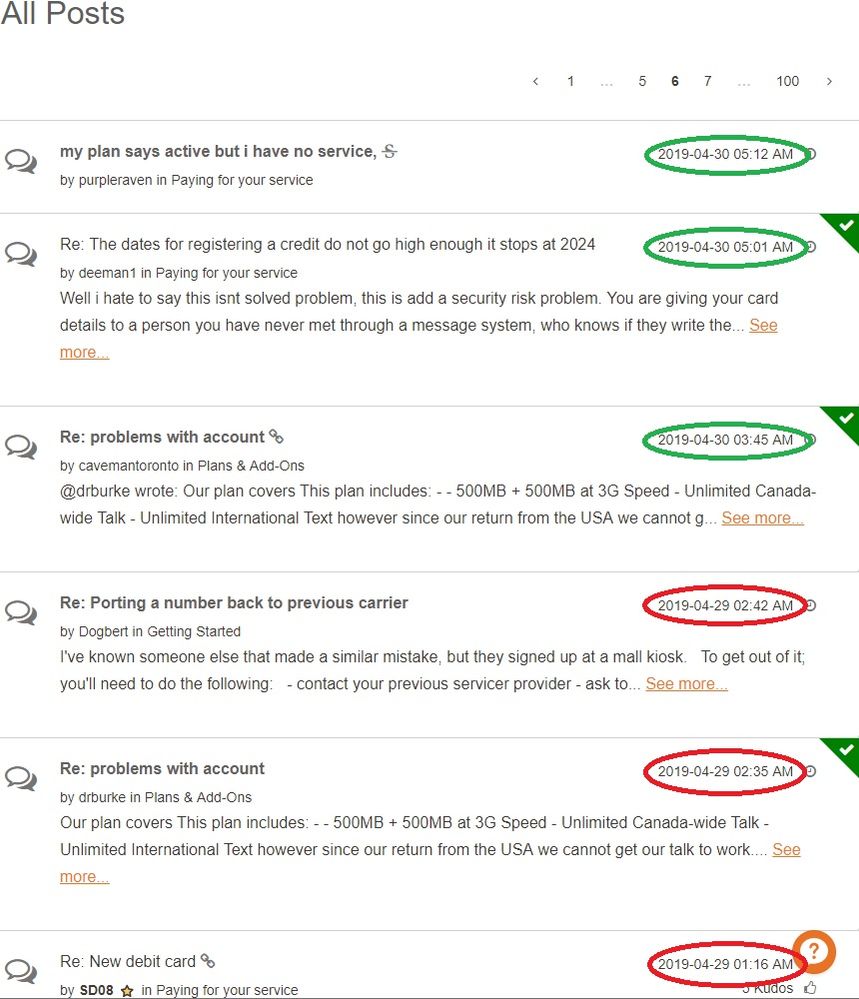 (Some posts omitted for brevity) 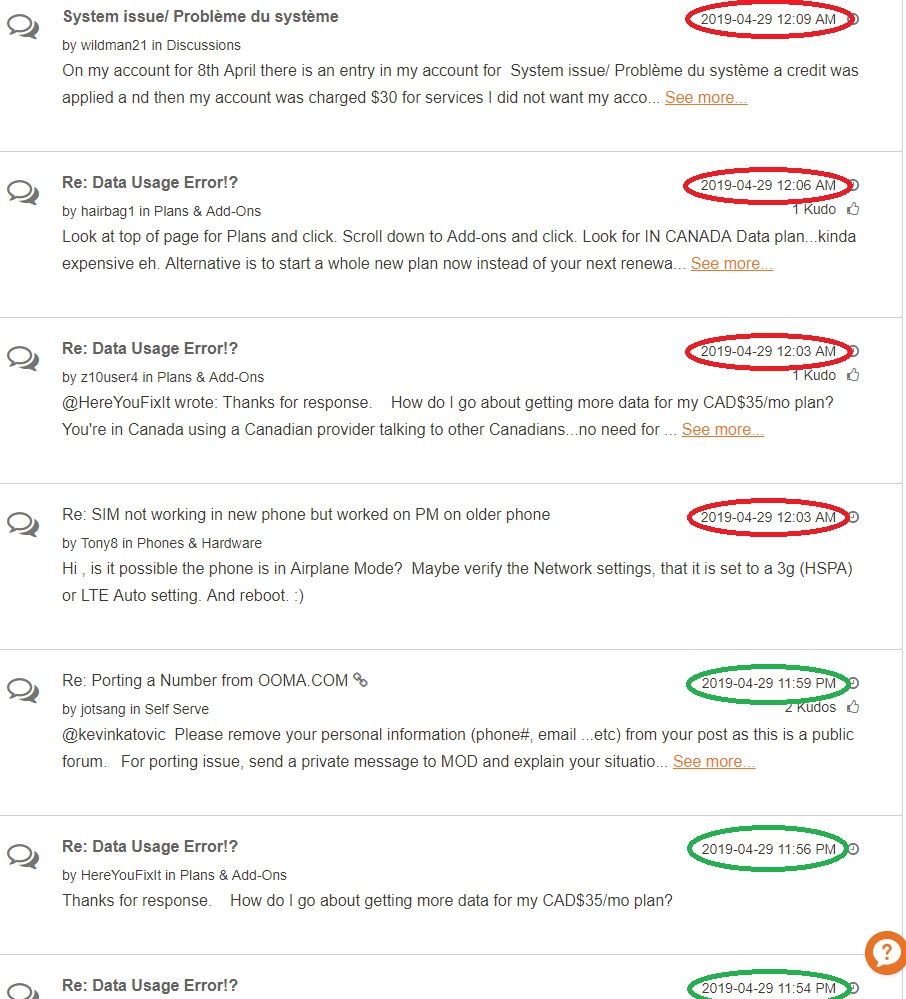 Thanks @SD08. The clock is something Lithium controls so I have opened a ticket with them to investigate a solution.

As has happened in the past, the Community site notifications are currenlty not working.  I noticed this on Saturday night.

As has happened in the past, the Community site notifications are currenlty not working.  I noticed this on Saturday night.

For my not long time here...I've seen it on occassion. But not for this long. Maybe they don't want people to get the badge notifications coming up shortly-ish. 🙂

Hi everyone - just got an update moments ago from Lithium regarding the timestamp issue - good news is they were able to reproduce and identify the issue and escalate to the engineering team. Bad news is they don't have an ETA for the fix I am sorry to report. I'll keep working with them and keep you updated if new information/updates occur. Thanks again for pointing out the issue.

Thank you for your patience while I have been investigating this behaviour. I was able to reproduce this on an internal instance. At this time this behaviour appears to be a bug in the application. I have summarized my findings for our engineers to further investigate and potentially fix. While I do not yet have an ETA for a potential fix, I will continue to update you as I have more information.