I set my wife up on Public Mobile and it is working well for her. However, I've noticed that the max download speeds are more limited than I was expecting. They're decent and more than sufficient for her, but still, not quite what I might have expected for Telus or Koodo. (She was on Koodo before.)

Are Koodo and Telus given priority over Public Mobile in terms of download (and upload speeds), or is Public Mobile actively throttled (but still provided LTE speeds)? Or is Public Mobile using a more limited LTE feature set? Or is this all just by chance? To be fair to Public Mobile, I don't think I've ever seen truly scientific speed test comparisons between Public Mobile vs Telus/Koodo. 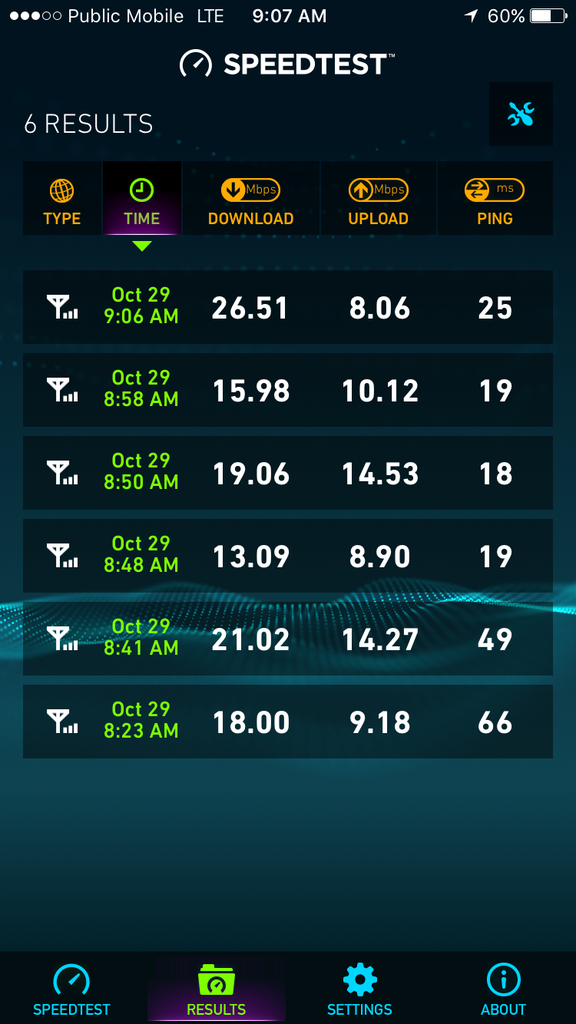 
Okay, let's go to the horse's proverbial mouth to get the definitive anser.

Could one of you please confirm whether or not PM traffic is throttle, de-prioritized, or otherwise treated worse than traffic from parent and sibling brands Telus and Koodo?

Answer: No, PM traffic is not throttled

There seems to be some concern about some speed tests possibly suggesting that PM traffic is not as quick as Koodo or Telus.  Can you please weigh in and provide any info you can?

Answer: Data speeds can vary depending on different scenarios:

As long as you're happy with real world testing - ie Web browsing, streaming etc then who cares about the numbers. The more important number is the dollars in savings every month!

I care about the numbers for two reasons.

1) Intellectual curiosity. Public Mobile seems to be positioning itself to take Wind customers, but not to go head to head against like companies like Virgin or Fido. Perhaps this is one way they've limited PM to still be way better than Wind but not better than its sister brand Koodo. Or not.

2) For my wife it's fine. For me it's also usually fine, but sometimes on business trips I need to tether my phone. In this scenario, my question may be more important, esp. if I'm sitting in a hotel with a bunch of other Telus or Koodo users also tethering.

Wow this is interesting for sure, however I have never really had a problem with my data speeds with public mobile.

I found that wind used to be good but now their prices seem a bit overpriced for what you get. They used to have things like pay by minute but now their cheapest plan is $25 which isn't bad except for the fact their service is only available in a select few areas.

I'm not sure Wind has ever been good, at least not in a consistent fashion in Toronto. Anyone I've ever known on Wind has always said Wind was cheap, but never said it was actually good. Wind's network just isn't up to par, and their LTE rollout is not going to magically make it good enough to compete against the big three any time soon.

But that's a different discussion.

The problem too with Wind is they sell it as LTE, but not all LTE are the same. The AWS band they use is so weak it has trouble penetrating concrete...not good in a big city. Theoretically there speeds are legit if you are stanging under the tower...but the service is not useable in a practical world. I suffered it for 2 years thinking ...hey it's cheap. I will not miss the frustration of deadzones in areas which should have good coverage...and also I love that I am able to put on a cartoon or something for the kids if we are waiting at the doctors office and they aren't feeling too hot...sickly toddlers+buffering=STRESSED OUT ! haha

Well, I haven't really noticed. But when I was with Virgin/Koodo, I disabled LTE for fear of going over my very small data limit faster. Ever since PM, it's been plenty fast, so no complaints. (Even faster than my home internet)

I suspect the app is not optimized

Try downloading a large file and you won't see any slowdown

i ran a speedtest on my Galaxy S6 and got 47.09DL 40.31UL. i got a buddy i was with who is also on public mobile to do it on his nexus 5, and he got around 27DL. i originally thought the slower speeds were because he had an older phone, but looking at your wife's iphone 6s results i don't know what to think anymore