So chkd, and the latest query about this number was early Sept.

I see that it is a common number used by Pub'Mob', as I thought it was.

Anyone else receive odd acting (presumed) texts from this number the last 48 hrs ?

_ Anyways yesterday (Oct 2nd) I received   2 presumed text from this number  within half hour.  Presuming it was just monthly notifications i did not bother to review right then.     When I did, there was some avatar,  (same on both) then the first couple words.

I cliked on it as per norm' to view full text  and instead 'Downloading' popped up   . .  which is freaky to see these days when unsolicited !  It only took a couple seconds for it to complete or attempt.    I then deleted.

I tried the other one,  and it did the same.

_ This a.m. another 519-8 arrived  previous to 5 !!    It also had a odd avatar but different,  and at least one of the words was  "Dr " .     Since I had figured out how to access the listing of texts from another direction allowing  deletion without  reading  I went that route instead.

Were these legit (unsolicited) downloading by Pub'Mob ?

Or is the number being used by the spoof  community ?

Thanks for your time !

@dougc , thank you for reaching out with this.

I work on the Public team. I can confirm this is a legitimate message. We wanted to extend a free health care service to our base customers in ON, BC, AB & SK. The download link is not a virus and will take you to the app store to download the Babylon by TELUS Health app.

@dougc yeah I received that a few days ago. it's for an app for virtual doctor or something. it's starts with "since public mobile is part of the Telus family" etc.

Within the text at the very least have a Y or N  !!

I'm one of those that is still using a  aged flip-phone, which I will have to chk in utilities/settings,   as I'm unaware of a  'disable auto-retrieve MMS' option.    And also make time to chk for a download log.

I also received one on Friday. Here it is. 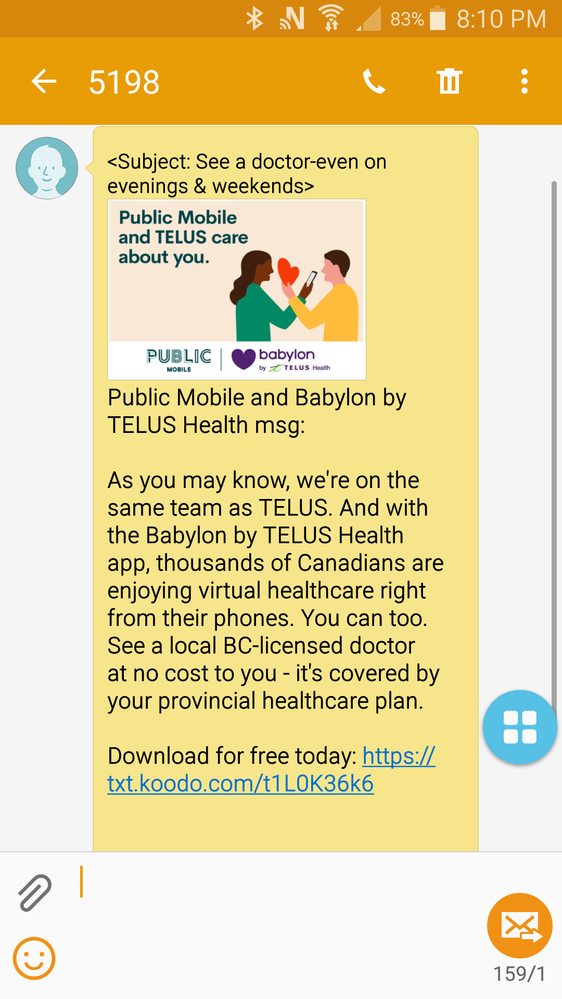 iirc these short codes can't be spoofed but I could easily be wrong.

Presume this was for everyone as a reminder.

In this case I had just clikd on the notification to try and see the 'body' of the text.

If all three  were legit from Telus Corp.,  the first 2 obviously tried to open to show the text and graphics as sampled above   but landing on a aged flip phone it failed, and was just successful in freakin'  me out  😉

the good thing about being hacked on Android is you will be able to see the apps that were installed and uninstall it. it's not like a personal computer where "DLL" files and windows system files can be installed with Trojans/viruses

As far as I can see, this came in as an MMS. There was an image so it became an MMS. Usually you would be notified of the presence of an MMS. Then you would need to turn on cell data and then touch it for it to download. Then you would see the image and in this case the link.

If you got an MMS from an unknown source like from a 10 digit number then certainly be wary.

This is a spam ad from Telus babylon.  Normally, I have pretty thick skin with ads because I use ad-blockers, spam filters, etc. to limit this stuff.  However, with Public Mobile, unsubscribing to this means unsubscribing to everything including useful notifications.  I think that is a sneaky way for force feeding their customers ads that are potentially unwanted.  Totally shameful.  Public Mobiles needs to allow customers to unsubscribe to ads and not affect other notifications.