It’s clear from all the hate that I’ve been reading in this thread that this move will absolutely destroy Public Mobile, and I honestly think that’s what Telus wants. But let’s ensure that it also destroys the reputation of Telus as well, as obviously this is a move that has been orchestrated by them!

I agree - it's time to start contacting local news media as well.  CBC, CTV, CityNews, Global CP24 - if enough people have them investigate the complaints and contact Telus PR - this is going to be huge.

There is a groundswell of opposition here, I have never seen any post on here grow so big this fast.

Formal complaint for the 10$ increase

I Signed up for the $120/90days for 12 GB LTE data back in 2016 Fall Promo told explicitly that there will no changes to the price of the plan as long as I remain an active customer with an active account. I was notified today through text message that this price will increase $10/month, or switch to Koodo to retain the plan.

I have renewed my service last week and today i got a text notifying me to switching over to Koodo.

I want Public mobile to explain this and i want my money back for the next two month of the service i have already payed to Public mobile.

I am giving Public Mobile 7 days of notice starting from today, If i dont hear anything from Public mobile by Friday morning than i will submit a complaint to CCTS.

Since I assume all my referrals will jump ship, I have zero incentive to stay. Fingers crossed the competition will offer something to try to nab all use Public Mobile folk jumping ship.

Patiently waiting, will gladly jump ship. I just wished I did it earlier when there were still better promos going on...

My plan just renewed in early Feb (like a lot of people) so I really have no choice but to use it up before I switch. If the other telcos are smart, they will hurry up and put a plan together to attract all this switchover business. Telus is treating customers worse than Rogers by doing this bait-and-switch ... and I thought switching from Rogers was a good thing. Nope.

I actually heavily debated with the 10GB promos offered by pretty much every carrier. It timed nicely with my plan renewal considering I jumped onto this promo early. But I just thought, there's no use of me paying excessive amounts of data when I can't even use the current PM data. But the bang for my buck though considering what just happened...

The thought of me going back to Koodo does not bode well either. Been with them for over 5 years, and not a single drop of loyalty reward.

Just got a similar text being part of fall 2016 promo.

Public Mobile here. Starting March 20th, 2018 your rate plan price will increase by $10 per 30 days, making your plan $150 for 90 days. But don't worry! Our sister brand, Koodo, has a way for you to keep your $40 price point. Until March 15th, 2018, join Koodo and get 4GB of data, unlimited text and now additionally get UNLIMITED CANADA-WIDE minutes for $40/month PLUS get a one-time $100 bill credit! Offer valid for 16477662507. Redeem at your nearest Koodo location or online at https://koo.do/gocustomer-service. Show this msg and use promo code GOKOODO404GB to redeem along with 2 pieces of ID. Your phone number is your validation code. You're included on the list for Public Mobile offers and deals. To be excluded, reply unsubscribe. Conditions apply.

Thanks for starting this thread how does creating a complaint work?

Re: Formal complaint for the 10$ increase

So Telus, you lost too much money in the $60 for 6GB rampage in December and now you are taking it out on the $40 for 4GB crowd.

Also, it appears that the plan isn't properly set up in the koodo system yet either, when I apply the code these are the only plan options I see available:

Edit: My province was set to MB - I was obviously comparing prices between provinces the last time I went to the Koodo site.  The plan is indeed there if you're in Ontario, at least: 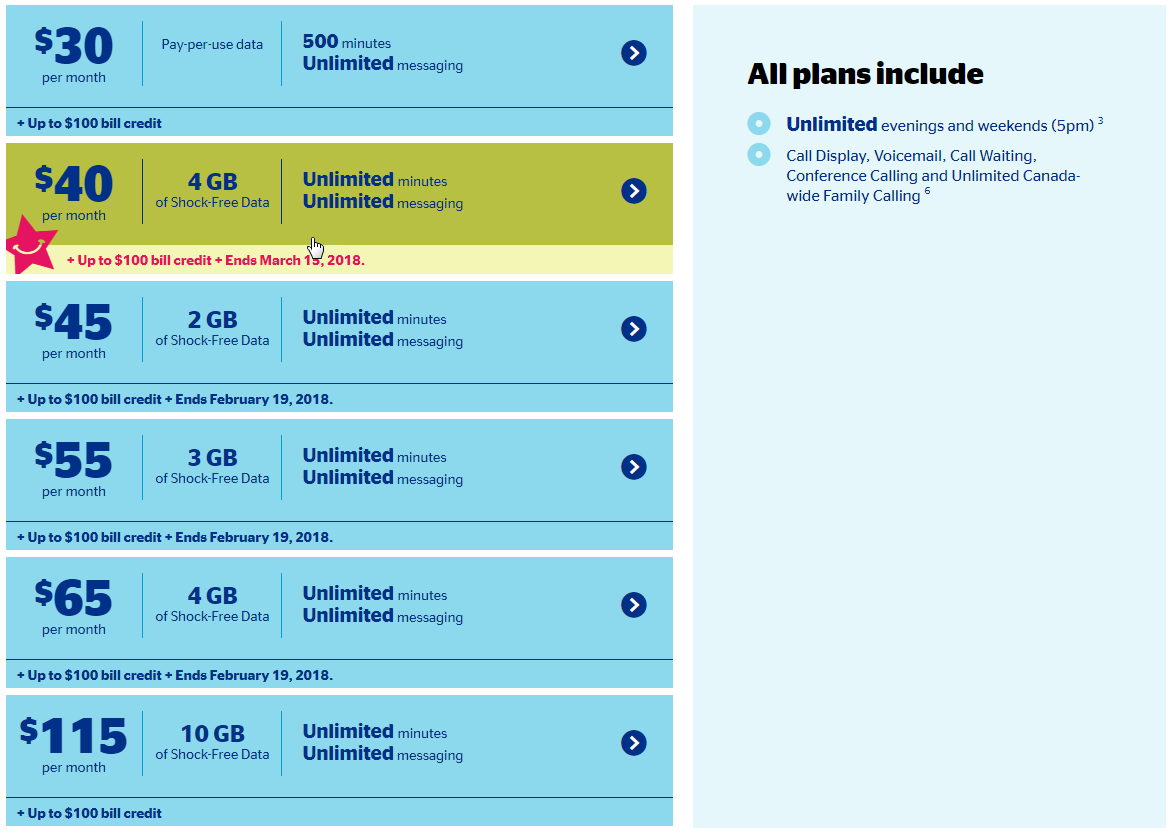 Re: Formal complaint for the 10$ increase

I am giving Public Mobile 7 days of notice starting from today, If i dont hear anything from Public mobile by Friday morning than i will submit a complaint to CCTS.

Why wait? File a complaint now. They have the ability to respond to customer requests using this forum -- that is the purpose of it. They are being suspiciously quiet and deleting user posts.

Go here http://www.ccts-cprst.ca/for-consumers/complaints/complaint-form/ and cite the bullet point from their Fall 2016 Promo:

Fido is Robers, I mean Rogers.  As a matter or principle, I don't want to give Rogers any more money than absolutely necessary.  I had Koodo before Public Mobile, my experience wasn't bad.  Except the amount of data I had with them was paltry.

Is Freedom usable now?  I remember for the longest time, the joke was "Freedom mobile's unlimited is great, because it frees you from using your phone, cause you can't ever load anything."

Fido/Rogers service is better than Freedom, but it won't knock your sock off. Still many dead zones..

Bell is ok if you're okay with hell or have money to burn.

Koodo is a good choice, even though everyone here wants to make a statement to Telus. Since Telus/Bell share the same towers, your services are better than the other two....

The thing I wonder is:

Why is the promo not tailored to individuals based on their time of renewal? Oh well.