what do ppl pay on average a month here??

is anyone actually at $0?

so common that’s how ppl respond

how did you manage that??

what do ppl pay on average a month here??

is anyone actually at $0?

@Savebig2   I believe there are a few people here who because of the accumulation of rewards, community, autopay, loyalty and RAF, don't pay anything for their plans and I've read the odd post where some will be paying nothing for many months into the future because of PM's rewards system.

I'm on the $15 plan and occasionally I don't pay anything depending upon the community rewards, unfortunately I've not really made much effort to go hustle up many RAF rewards so I'll always be paying something, but TBH I'm not really too bothered as long as I can at least get a few dollars off my plan every month.

Happy to hear that you are saving quite a bit vs what you paid at Telus. 😊

@Savebig2  I switched down to the $15 plan because of free add-ons over the time I been here.

So here's a screenshot I took a moment ago.

$59 balance accumulated from posting on these forums and $20 of it was from a text I got a few months ago to refer someone and get a $20 bonus.

So before posting in these forums I owe $4. Adding all things up its like July 2022 I'd have to pay out of pocket if I stop posting. Oh and last time I paid a bill out of pocket I think was like Oct/Nov 2019 lol. 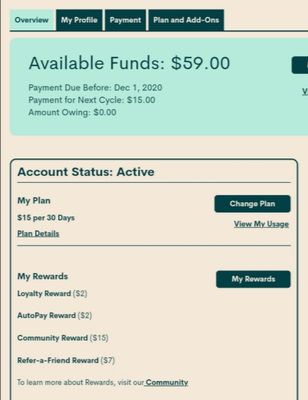 1. Uncertain about quality of service, as no customer service line (everything online)
2. Concerns about self-serve, troubleshooting problems by oneself
3. Problems with buying SIM and starting up account.
1 Bravo
Reply

@cin7 you're right, if you can tackle those complications you will be able to refer people much easier