I am desperately hoping to switch to PM as I switched my parents and my wife last year, but I'm stuck at one point.  I understand that the data is 3G, and if I buy a data addon, it'll also be 3G, unless I'm only on a Talk/Text plan which would make it LTE data.

My holdup is this.  I work from home and my backup internet is my cell plan through tethering.  This make LTE pretty important as 3m service is just not enough.  3G is "adequate" but not great.  Is there any way for me to buy/use LTE data as needed, or am I stuck on 3G regardless?

Maybe this would be a great idea for a new addon.  An LTE "Day/Week/Month Pass" to be added for a specific amount of time.  I'm certain that this would be easily feasible...or maybe not even full LTE, something like a 5mb service or 10mb max etc.

*I understand I can get an LTE plan, but the prices aren't really competitive, which I why I was hoping for the option to add it as needed.

Thank you.  Assuming that's true, that would completely resolve my concerns.  Can anyone else confirm that this is the case and not an anomaly for RobertQC?

I understand that connecting to LTE gives a better signal as it not only allows it to bounce from 3g to 4g, but it's also much more of a proliferated/current technology.  20-30mb is in LTE territory for most places anyways (outside of major centers at least), so this seems odd that they would throttle it at 3mb when you can just flip to 3g and get 10x that?

Thank you.  Assuming that's true, that would completely resolve my concerns.  Can anyone else confirm that this is the case and not an anomaly for RobertQC?

I understand that connecting to LTE gives a better signal as it not only allows it to bounce from 3g to 4g, but it's also much more of a proliferated/current technology.  20-30mb is in LTE territory for most places anyways (outside of major centers at least), so this seems odd that they would throttle it at 3mb when you can just flip to 3g and get 10x that?

@PlanShopperI can assure you it is a well known around here that when using your 3G plan, if you actually set your phone to 3G you will get uncapped speeds.

If the LTE network was not throttled, you could be getting 100x the speeds. The 3G network is no longer being taxed, nor do they advertise speeds as they do on LTE. The LTE also provides much better latency.

@PlanShopperThis happens to everyone at public mobile. Not just me. This has been literally discussed 1000's of times.

I actually tried to use my LTE plan yesterday in a poor location for LTE speeds.  I forced my cell to 3G network only.

I was able to browse 'ok', but trying to do a conference screen share, there was no luck on 3G.

I've tethered fine previously in good LTE on the LTE previously, watching a 1080p 90-minute stream with no issue at all.

I may try the 3G in a better location sometime soon.

As long as you are in an area that has 3G reception.

When you are on throttled LTE (3mb) and you set your phone to 3G you get much faster speeds because 3G is not being throttled or at least not the same as the LTE. Some people call it an exploit. (I do not, I think its fair) LTE is a better and more advanced network. I think if you choose to use the crappier older 3G (slower latency) network its fair to get faster than 3mb throttled speeds.

If I were to switch to a 3g plan a Public Mobile, I would seriously consider just disabling LTE on my device since the speeds will often be faster after taking that step because of the way that Public Mobile doesn't throttle the 3g network speeds.

When you are on 3G, you get the the fastest speed that 3G can provide.

When you are on LTE, you will be toggled down to 3Mbps.

I followed Luke's thread and made the switch to 3G. I get so much more data for so much less and I have no seen any difference. I use alot of data since my work doesn't have wifi. I also use Data in the car for my Waze app and to stream music and podcasts. I have never had any buffering provlems. Luke11992 had a great thread. I suggest reading it. Unless you're gonna be dowloading alot of movies or doing alot of video calls. There's no point of (full) LTE data.

Thanks you! It seems there's more and more anecdotal evidence that using the 3g setting is in fact faster.

@turboron, Public Mobile does not offer a 3G only package.  If you're on the 3G Speed plan, it is an LTE plan, and the speeds have been throttled to 3G 'maximum' speeds of approximate 3000mbps.

The plan is delivered on the 4G/LTE network.  You can set your phone to only use the 3G network, and you may well experience faster speeds overall, but the latency is longer on 3G vs LTE.  All voice calls are performed on the 3G network.

All I know is, selecting a forced 3G connection can get better overall speeds for download but suffers from a larger latency than the 4G/LTE.

To give you some proof.

This is the data speed when forced onto 3g network. 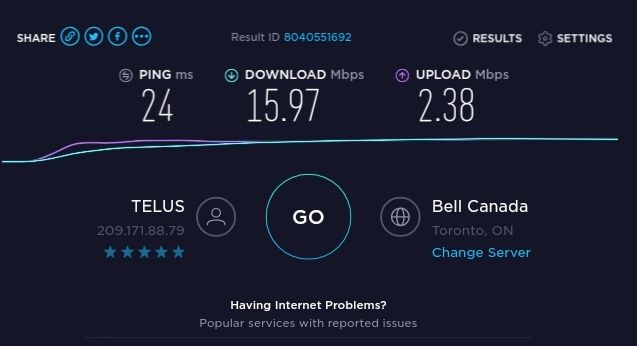 And this is what it is on 4g

I apologize for the repetition however I searched for the forums initially for the question about LTE addons, or one time speed increases, not thinking to search for a technicality on the 3G speed.