You moved it to lounge because you thought the message was blank when in fact the question was in the tag.

I responded to your first post informing you that the question was in the tag. After two hours of it still sitting in the lounge I reported it to Moderators.

Here is the response from over 6 hours ago. 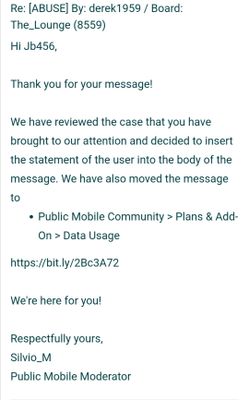 I then went and confirmed that they did transfer it to where they said they did.

You could even ask @gblackma  as he was asking where the tread disappeared to when you first transferred it to lounge.

Now in just the last two hours you have stated you transferred the thread back when in fact the moderator done so hours ago before your response.

Not hard to admit an error than covering. I assume you didn't think I I had contacted the moderators. Than again don't know why a retired Oracle is doing Oracle's job. To many hands in the cookie jar as another member recently said regarding another issue.

Have a good evening!

There's nothing to cover, other than maybe when I said it was still in the lounge. I did perform the operation that you asked for and went through the process of it. If anything, I might have told it to move to plans and add-ons when it was already there as per you asking for this to be done. If you have any further questions about this, please feel free to send me a private message.

@Jb456,seriously I think you need to get it out of your head about this being a job lol. It could have just had word selection I don't know, but anyway the tried oracles have most of the abilities they had as Oracles and can continue to move and edit.  But it isn't a job for either the oracles or retired oracles.

* I am happy to help, but I am not a MOD please do not include any personal info in a message to me. Click the

in the bottom right to create a trouble ticket *