When I use my cell phone to make or receive calls from other numbers, they sound glitchy, laggy or aren't very clear. My cell phone speakers work fine for playing audio on videos and music. What could be causing the lack of clarity?

@fricstix : Luddite is meaning the other setting where LTE or 4G or WCDMA or UMTS or 3G are seen. Tapping into it might give a list of priority for those like LTE/3G/2G or 3G/2G or 3G only or 2G only (on my Samsung A31 running A10)

But seeing as how talk uses 3G and that's where you're having difficulty...I'm not sure. But give it a whirl. He's the Oracle. 🙂

I am not sure where I can check or change that. This is what my networks options are 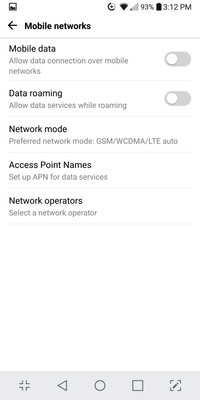 @fricstix   You don't see a "preferred network type" or similar somewhere under your network settings?

@fricstix : Right there...Network mode. Yours appears backwards. It starts with GSM. But maybe that's how LG shows it.

Edit: and I wrote this before seeing the above edit 🙂

Is this what you mean? If so which option do I select? 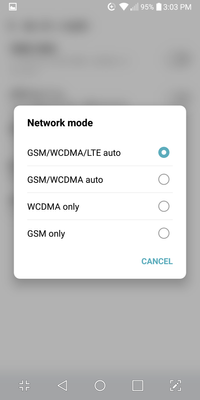 @fricstix : WCDMA only would do it from that limited set.

I will try that out. Is WCDMA only the best signal or is it because of my not so good reception? Is it okay that I also changed the network operator to Public Mobile LTE instead of auto?

Should I change the network operator as well? 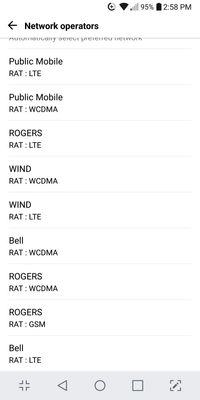 @fricstix : Fiddle and test with each. I'm not convinced of this idea seeing as how talk uses 3G and that's your problem. But sure, match the LTE with LTE and WCDMA with WCDMA.