I joined PM yesterday and I've been trying to get to the bottom of whether PM speeds are throttled back. With near certainty, there is a measurable difference.

Tonight I tested using the exact same hardware, same location, and same test server using a PM SIM and a Telus SIM. Tests are roughly 3 minutes apart because it took time to remove the SIM Cards and connect to the network. Hardware is an iPhone 6 with iOS 10.1.1. I would love to do N=3 but I don't want to burn through my data in one day...

Here are the results: 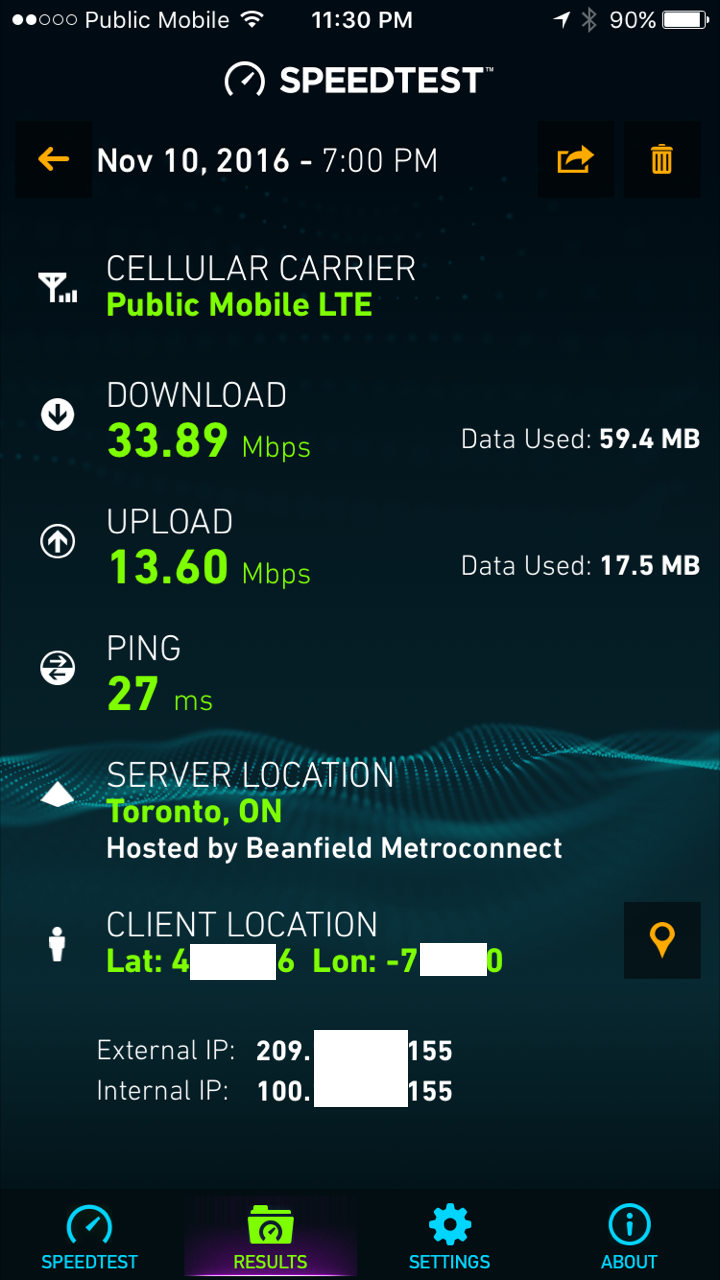 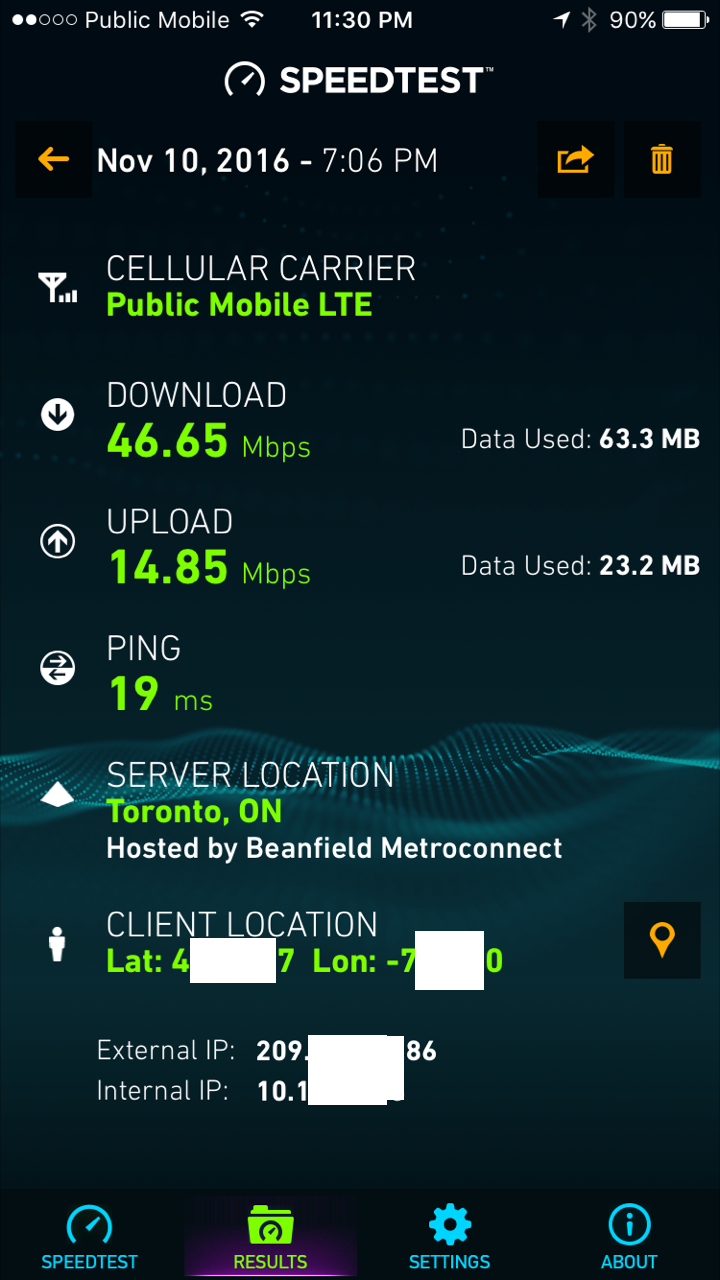 You are correct, wind was always cheap service...so so. I finally gave in to PM. I'm paying few bucks less, LTE everywhere and losing 1gb.. How could I say no? Not to mention Wind has been getting worse and worse over the years. A real shame.

My wife loves speed up from Wind, but I ported from Telus and Speed Test is showing a distinct slowdown (<20 Mbps).  In the screen capture the top two are Public Mobile showing 5 bars and LTE+ (I'm across the Highway from the tower). Next one is same but showing 4G (when I first activated - took a few minutes for LTE to show in the status bar). Next two (>50 Mbps) were last week on Telus.

All tests were from the same location with the same device (Note 5). Last three were on home WiFi - there was a rogers problem which got corrected. 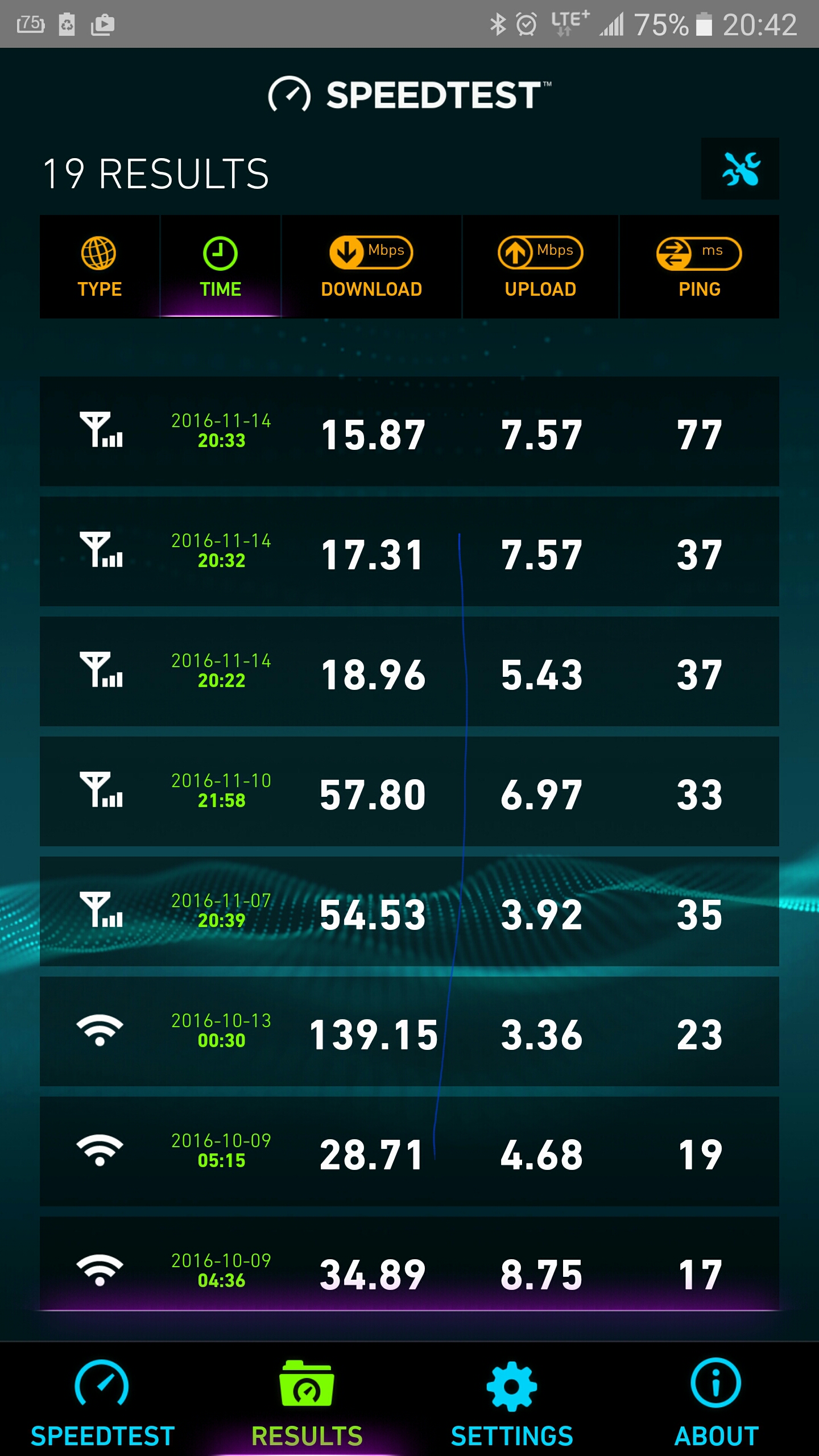 @raxen Those are great speeds. I must admit when you get above 30Mbps, what really matters is the ping/latency times esp. when you are surfing the web because websites nowadays get information from various sources (ie. facebook, google+, analytics, advertising, etc.) which can add to the delay. Having come from Wind where the ping/latency was average 100+ms, having a sub-20ms ping time makes a real difference. It's less of a difference having 30Mbps vs. 50Mbps unless you are downloading a large file. Actually, my home internet is slower than PM's LTE and that is where I do most of my Internet related stuff and it seems really responsive mainly because the ping times are in the sub-10ms levels.

I am not surprised that speeds are throttled. You get what you pay for. I believe this is also true for home internet like Shaw came Tek Savvy.
0 Bravos
Reply
Highlighted

@Hmm That's incorrect. Teksavvy by law has the same speeds as Shaw/Bell/Rogers.

@Hmm That's incorrect. Teksavvy by law has the same speeds as Shaw/Bell/Rogers.

If that was true then why do independent speed tests, say from Netflix show speeds from Teksavvy lower and significantly low in ranking compared with Shaw Cable* (which is the backbone that TekSavyy cable users must use)? And this was looooong before Shaw high speed 150.

*The Netflix ISP Speed Index lists the average prime time bitrate for Netflix content streamed to Netflix members during a particular month. For ‘Prime Time’, we calculate the average bitrate of Netflix content in megabits per second (Mbps) streamed by Netflix members per ISP. We measure the speed via all available end user devices. For a small number of devices, we cannot calculate the exact bitrates and streaming via cellular networks is exempted from our measurements. The speed indicated in the Netflix ISP Speed Index is not a measure of the maximum throughput or the maximum capacity of an ISP.

Bottom line: I do believe PM has lower 3G and LTE speeds then Telus.

This is really off topic, but Netflix's speed index is showing average speeds for ISP's offering fiber (FTTH) and copper. Teksavvy currently doesn't have access to FTTH.

If you compare Bell or Telus DSL with Teksavvy, it's similar.

@sheytoon wrote:
This is really off topic, but Netflix's speed index is showing average speeds for ISP's offering fiber (FTTH) and copper. Teksavvy currently doesn't have access to FTTH.

If you compare Bell or Telus DSL with Teksavvy, is similar.

Yeah off topic....but did you look at the historical data which includes Shaw before they had fibre? And why doesn't have Teksavvy have access to FTTH if they are using Shaw lines, at least in BC?